By: RedScorpionsGirl (aka RedStickStudio) First published online: 21-11-2009 on Bell of Lost Souls 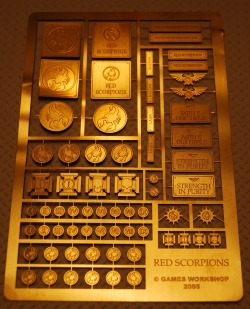 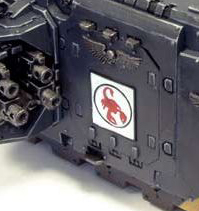 Forge World’s Brass Etch sheets are a great way to accent troops, vehicles and more. A bit pricey at £8.00 ($16.00) each, but if you are looking for that extra bit of detail they are a perfect fit. Forge World’s newest book series, Model Master Class provides directions on one way of getting them from the sheet to the tank (and they don’t go into a lot of detail), but after using them, I have found a different approach that seems to work a lot better than the tips they offer up. 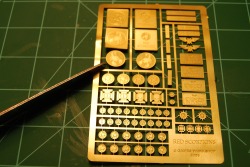 Trimming etch off sprue with scissors.
The etches should be trimmed off with scissors, not cut off with a craft knife, clipped off with clippers or some other manner. These small pieces do NOT file well if you try to clean up the attachment points in this manner, and due to the small nature of a good portion of the pieces, a craft knife isn’t advisable either. Using scissors, you have a great deal more control on cleaning up the points of contact (usually 2) without ruining the etch itself.

At this point dry fitting the pieces to the tank is a good idea.
This gives you an idea of what the finished product will look like, as well as adjust where the final locations will be. If you take the tank and set it on its side, you can set the pieces across the side and evaluate the overall look. In general it is easier to attach the brass to the bare plastic, but have no fear, if you’ve already primed the model, they will attach without an issue. If you are adding them after the model is primed, simply place them where you wish, glue them in place and brush over them lightly with the appropriate paint to match your primer after the glue is dry. 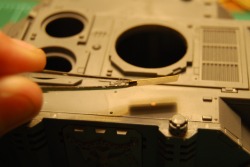 Once satisfied with the test placement, make a centre mark with a pen or Sharpie. The bright spot seen in the photo below is the centering spot.

This designates the center of the location for each of the etches you are using. Pick up the etch with a pair of tweezers making sure it is facing the direction you are intending on it. This is referencing the direction you might want the scorpion facing, the way the name plate goes on, making sure the Khorne symbol is right side up and not upside down…etc. Common sense in most cases, but it is something obvious to make sure and touch upon.
Place a very small drop of super glue on the dot you made on the model. Too much glue and it will ooze out around the etch and give you a very poor final result. If you get a bit too much glue in the area think ahead, and have something handy to quickly wipe it up. It doesn’t take a lot of glue for these to adhere well, so make sure of the placement and alignment, as you generally don’t get a second chance. 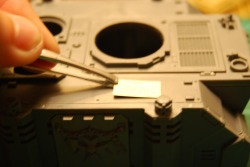 Seating the etch
Gently use your fingers in combination with the tweezers to seat the etch. It will adhere almost instantly. I will often cheat and put a drop of kicker/accelerant/insta-set on it to ensure it is seated. Once you are sure of the glue being dry, wipe the area off with a lint free cloth, or paper towel. 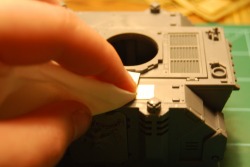 This will remove the oil from you touching the etch as well as any residue from the kicker still remaining, allowing you to have the best results for priming and painting. Prime as normal with light coats so no details are obscured. It is best to do this and once the tank is primed, touch up the area around the etch, and the etch itself with a light hand if need be rather than trying to do it all with the spray primer. Don’t worry if the etches look odd while the primer is still drying, as they have a tendency to look like they are spotty and/or the letters being filled in. Be patient and you will see the transformation when it dries. Once the etches are primed like the rest of the tank, either by brushing on the appropriate primer matched paint if already primed, or in the case of the unpainted tank going through the steps of priming and touching up, paint them as you would any other details on the tank.

Because of how fine some of the details and the text are, it is easy to obscure part or all of it with too heavy a hand when painting. Generally speaking this is either enamel or acrylic paint, whatever you prefer to use, however enamel can be much worse if applied too heavily. Even though enamel it isn’t recommended for painting in most cases, some people do still use it, and prefer it. Just keep an eye on what you’re doing and it will turn out great.